Email ThisBlogThis!Share to TwitterShare to FacebookShare to Pinterest
Posted by Drang at 00:00 No comments:

Heard 'Round The World

Concord Hymn
BY RALPH WALDO EMERSON
Sung at the Completion of the Battle Monument, July 4, 1837
By the rude bridge that arched the flood,
Their flag to April’s breeze unfurled,
Here once the embattled farmers stood
And fired the shot heard round the world.
The foe long since in silence slept;
Alike the conqueror silent sleeps;
And Time the ruined bridge has swept
Down the dark stream which seaward creeps.
On this green bank, by this soft stream,
We set today a votive stone;
That memory may their deed redeem,
When, like our sires, our sons are gone.
Spirit, that made those heroes dare
To die, and leave their children free,
Bid Time and Nature gently spare
The shaft we raise to them and thee.
All photos copyright 1983 and 2022, D.W Drang and the Cluemeter. 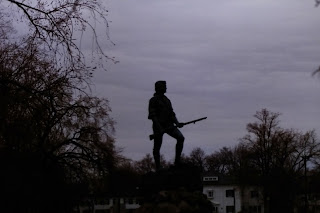 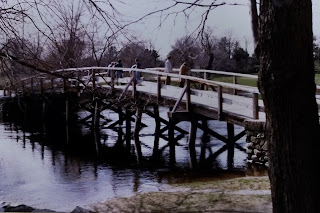 Does this bridge seem rude to you?
In 1983 I left my first tour in Korea and went to Ft. Devens, MA, for the Basic NCO Course. I was there over Patriots Day weekend.

I had a decent camera, but kind of crappy film...

Email ThisBlogThis!Share to TwitterShare to FacebookShare to Pinterest
Posted by Drang at 21:59 No comments:

Let it be known that on this day I triggered a leftist.

(IM conversation at work re: mask mandate being ruled illegal)
Her: Trump-appointed judge in Florida. Meh.
Me: U.S. Constitution. Separation of Powers. Meh yourself.

It's amazing how many people that trumpeted (heh) judges overruling President Trump  are now losing their shit.

Email ThisBlogThis!Share to TwitterShare to FacebookShare to Pinterest
Posted by Drang at 21:49 No comments:

Labels: #2019-nCoV, #COVID-19, #YearOfTheBlackSwan, In The News, Libtards, The Law, The Trumpening, Workin'

Ha! Some not-so-deep thoughts re: Ukraine

I have not commented thus far on Mad Vlad Putins ill-considered, and ill-fated, invasion  of Ukraine.

Militarily, Ukraine wins by not losing, but Putin loses by not winning. In fact, it's probably too late for Mad Vlad to do anything but try to save face. And even if he declares victory probably the best he can hope for is  nice dacha someplace...

But this video (note the source: Radio Liberty/Radio Free Europe!) definitely supports the contention that Ukraine is wining the propaganda war! Yes, the "Ghost of Kyiv" seems to be an exaggeration, and the whole thing with the Marines telling the Russian navy to pound sand seems to be that, at least, but the stories were wide spread, and nowhere in the propaganda manuals does it say "they have to be true."

But, Lord, do I want it to be true that Ukrainian Grandmothers are giving Russian soldiers sunflower seeds with instructions to keep them in their pockets, so the flowers will bloom in the Ukrainian soil they are going to die on...

Email ThisBlogThis!Share to TwitterShare to FacebookShare to Pinterest
Posted by Drang at 19:53 No comments:

Just found this, which I saved in 1999 shortly before my retirement, and has been taking up room on my hard drive ever since.

Email ThisBlogThis!Share to TwitterShare to FacebookShare to Pinterest
Posted by Drang at 10:23 No comments:

Update: meant to add this link: Auld Lang Syne in Yiddish
As much because it includes the lyrics in Scots, with a Sassenach, er, English translation.
Email ThisBlogThis!Share to TwitterShare to FacebookShare to Pinterest
Posted by Drang at 21:35 No comments:

That Time of the Year 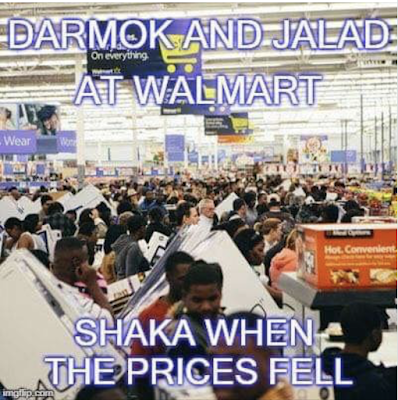 DO I UNFAIRLY PAINT THE LEFT WITH A BROAD BRUSH?

...I’m talking about YOU. Regular people. Voters. The guy next door. The masses on the internet. Just average joes. Democrats. Libs. Whatever you call yourself. Anybody who identifies as being on the left.

When your leaders pick a narrative, you drink that Kool-Aid. Even if it’s shit flavored Kool-Aid, most of you smile and tell us it’s the best fucking Kool-Aid you’ve ever tasted. It’s milk from the teat of a magic cherry flavored Unicorn. Nope. It’s shit. You all know it’s shit. But you go along with the narrative anyway.

When the insane progs among you lie their asses off, I’m talking blatant, easily disproven, painfully ham-fisted, fucking LIES… Do you call them out? Do you say, “hang on guys, that’s a little nuts”. Because if you do, the rest of us sure as fuck don’t ever see it. Pick a topic, any topic. It’s always the same.

Read the whole thing. When I got to that part, though, I laughed out loud, woke Mrs. Drang up from her  migraine-induced snooze, and further disturbed her by reading the entire thing out loud. She hasn't objected, so I guess she agrees. Either that. or she has Plans for tonight while I'm sleeping.

(Actually, i know she agrees because she started talking Seattle politics...)

Email ThisBlogThis!Share to TwitterShare to FacebookShare to Pinterest
Posted by Drang at 11:04 No comments:

Crazy Eddie, I tell you!

Because it's OBVIOUSLY their fault...

Los Angeles ports will fine cargo ships waiting to unload their goods in an attempt to relieve congestion that is as desperate as it is gobsmackingly stupid.

It’s a fine so pointless and wrong that, of course, Presidentish Joe Biden has chimed in with his support for it.

According to CNBC, the White House is “hopeful” that fines will “ease the intensifying logjam of cargo ships” waiting to unload at Long Beach and the Port of Los Angeles. Together, the two account for 40% of the country’s seaborne imports.

They're All Crazy Eddie

The worst part is, Crazy Eddie is in charge...

"Renner, I must tell you of a creature of legend."

"Say on." Renner's image dialed for coffee. Coffee and stories, they went together.

"We will call him Crazy Eddie, if you like. He is a . . . he is like me, sometimes, and he is a Brown, an idiot savant tinker, sometimes. Always he does the wrong things for excellent reasons. He does the same things over and over, and they always bring disaster, and he never learns."

There were small sounds of whispering in MacArthur's wardroom. Renner's image said, "For instance?"

Renner's Motie's image paused to think. It said, "When a city has grown so overlarge and crowded that it is in immediate danger of collapse . . . when food and clean water flow into the city at a rate just sufficient to feed every mouth, and every hand must work constantly to keep it that way . . . when all transportation is involved in moving vital supplies, and none is left over to move people out of the city should the need arise . . . then it is that Crazy Eddie leads the movers of garbage out on strike for better working conditions."

Pass a law requiring Uber and Lyft to deduct taxes as if the drivers were their employees, and in the process destroy owner-operated trucking.

Pass another law essentially banning a semi truck built after 2010.

Then wonder why you have all those fully loaded container ships anchored offshore...

Not to mention vaccine AND face mask mandates.

And... well, you know. a lot of the stuff that has stopped me from posting more often the last year and a half.

Email ThisBlogThis!Share to TwitterShare to FacebookShare to Pinterest
Posted by Drang at 21:23 2 comments:


I believe that freedom is the deepest need of every human soul.
George W. Bush
43rd President of US (1946 - )