Better to light a candle against the darkness...

...than to reflect on the increasing irrelevance of your organization, and the futility of taking a metaphor literally.

Weer'd Beard reports that the Coalition to Disarm Law-abiding Americans thinks that a candlelight protest will somehow stop the blood in the streets.

Yeah, I know, "What blood in the streets?" (See previous post.)

Anyway.  Behind the times as I usually seem to be, here is the photo I took and was supposed to post on January 8th: 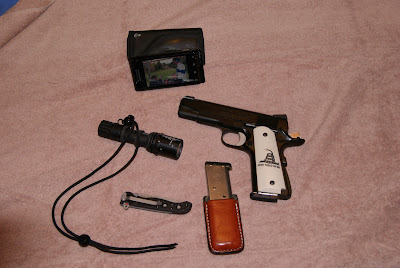 We have candles, but they're mostly the great, big pillar types that we use for emergency lighting during power outages, and are too unwieldy to move around for artsy photos, so I used my Surefire Z2 instead.  I think it has sufficient candlepower.

For good measure, and speaking of lighting a candle metaphorically, the pic on my Droid is of me helping teach an NRA Personal Protection class.

Colt Combat Commander, Surefire Z2, Columbia River Knife and Tool M16-10Z, and Droid.  Both mags are Pachmayr Stainless 7-round jobs with base pads I got when I picked up the .45; the mag pouch for the spare is Safariland.

For good measure: A Week’s Worth of Self-Defense | Power Line
Email ThisBlogThis!Share to TwitterShare to FacebookShare to Pinterest
Posted by Drang at 12:38