Stick it! A product review

Once you start shooting regularly -- or irregularly, as the case may be -- you will, as I have mentioned before, want to acquire more magazines, since the magazine seems to be the most common point of failure in a semi-automatic pistol.

And once you start shooting regularly and using all your magazines, you will find that, sure enough, some fail and you need to ditch them (or repair them, if possible) but if they all look alike...

So you need to be able to identify which magazine it was that had the damaged feed lips, or whatever.

There are many options. On my 1911 magazines, I used paint pen:
Paint pen wears off, but is easy enough to re-apply.

But if you have my penmanship, it looks like crap. If it matters to you...

Anyway, I was looking for a better way to manage my ammo cans, and went looking to see if there was a better looking option than a stencil and a can of spray paint. (Yes, Avery labels and a printer are usable, but ink jet ink runs in the rain. I spent 20 years in the Army. It always rains when I train...)

And I found these folks: STICKIT2THEMAX - Stickers, Banners, T-Shirts and more.

SI2TM (hope they don't mind my abbreviating their name) does ammo can stickers, in a variety of calibers and colors: 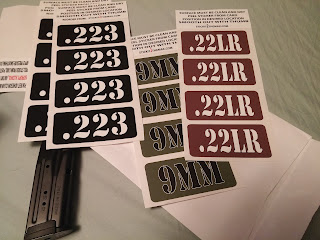 Turns out that SI2TM also does magazine base plate stickers for several different firearms; they have both "Number and Caliber" stickers in a decent section of text  colors, and what might as well be called "morale stickers." The number stickers come in sets of 1-6 and 7-12, but for the true magazine hoarder it would be easy enough to have, say 1-12 with white on black, and 1-12 with yellow on black, etc.

(For the Sig 250/320, subcompact magazines are a different order item than the compact and full magazines)
(For some foolish reason I neglected to get a picture of the full sheet until I was over halfway through.)

The stickers are printed on a heavy duty vinyl, and seem to have a pretty good quality adhesive, although when I attached on sticker askew, I was able to peel it off and re-apply it.  Obviously, I haven't tried these out with a full destructive testing regime, and I doubt I will, but they seem to be a great option for keeping track of range/training ammo versus defensive/match ammo, both in a magazine and in the can.


I had no idea how we have been conditioned by e-commerce.  I ordered these on Tuesday. Got the order confirmation and receipt in email, then... nothing. No tracking number. What's wrong with these people?!

My order arrived on Saturday. From the east coast. Never mind...

By the way, in the photo above with the can sticker on the cans, the two cans on the right hand side of the photo are old GI 7.62mm cans. The two flat OD Green cans on the left were acquired at... Costco.

$20 for a set of one .50 caliber can and one .30 caliber can.Going back for more, I hope they're still in stock...
Email ThisBlogThis!Share to TwitterShare to FacebookShare to Pinterest
Posted by Drang at 13:58

Geez, why does it have to be so complicated?

If you have magazines that absolutely and reliably (for various definitions of "reliable") don't feed or don't drop when you're reloading, just discard them They're "consumables".

If you're not willing to do that, then mark them CLEARLY ... my best solution is to spray paint the base pads; if they don't have base pads, then you can buy them and then spray paint the no-go color of your choice. Or just throw them away, but it's better to have a magazine which doesn't eject reliably than to have no 'spare' magazine at all.

Even magazines which will not eject reliably may have some value. YMMV, but I have a few single-stack mags which I hold onto because there are situations (in IPSC competition, for example) where you don't need a magazine to 'drop' reliably

I'll be interested to see how they hold up under use. I'm still using Sharpies... sigh

MAG-40 in a few weeks, I figure I'll post an update then.