Legislative season is almost over, although with the clown show Olympia has become it is no longer accurate to suggest that our money or freedom are safe if the legislature is not in session. We're talking about a state where the state tried to sue the voters for an initiative we passed, after all.

Berthold Brecht would have been right at home here.

Anyway. It sounds like most of the bills are dead, although, as Joe points out, these clowns are always willing to pull a Miracle Max on bills that should have died... 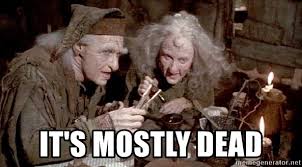 Plus there's always the possibility that Steyer and Bloomberg will finance another corrupt initiative to back an even worse law.

One good bill remains, that would remove the restriction on spring-assisted knives. I have a lot of respect for the late Glenn Ford, Capt. USNR (RET), but The Blackboard Jungle resulted in silly restrictions on knives you can open with one hand, which sounds like a minor inconvenience until you need both hands to do a job, and a third to access the tool you need to do it. ("No shit, there I was, 30 feet up a ladder...")

The majority of the rest of the remaining gun-related bills should die in a fire.
Email ThisBlogThis!Share to TwitterShare to FacebookShare to Pinterest
Posted by Drang at 11:23