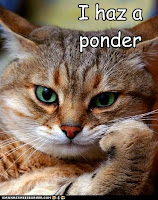 Haven't posted as much as I might, for a variety of reasons.

For one thing Bobbi and the guys at Powerline are tracking my thoughts pretty closely, and probably more eloquently than I could.

When it comes to science, I have found Spin, Strangeness, Charm and Watts Up With That? to be excellent sources; the former, especially, posts daily (if not more often) on news reports put of Europe, translated into English, with clear explanations of the science and medicine involved, with a minimum of hysteria. 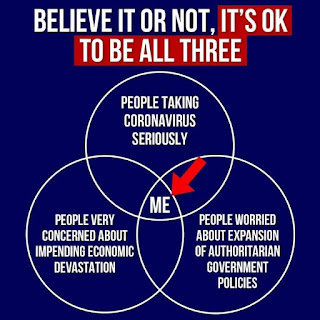 There is a lot we still don't know about SARS-CoV2 and COVID19. A lot of that gets lost in the squabbling surrounding it.

How virulent is it? What simple countermeasures are effective? Are the asymptomatic contagious? are there risk factors beyond the obvious?

It is my opinion that after a 2 or 3 week lockdown we could have started re-opening with precautions, and we would be a lot better off, because people would still be working, the economy wouldn't be tanking, and, based on the experience in certain places that did not go full "Stay in your homes or else" mode, the disease "profile" would look little different.

I am not an epidemiologist. I admit I could be wrong. But when you look into the backgrounds of the "experts", there's a lot to question there.

The Brit that claimed the USA would have 2,000,000 deaths  was not only grossly mistaken, but he was responsible for several past public health related over-reactions on the part of Her Majesty's Government. (Not to mention having his married lover visit him from across town after publicly scolding Brits to stay indoors...)

Several years ago Dr Fauci responded to legislation banning certain virological research by funneling money to... a Chinese lab in Wuhan China. (I can actually follow the reasoning here. The research involved testing certain mutations to viruses to study responses. and treatments, so the research was important. But...)

As for government reaction...

Releasing felons from prison and arresting law abiding citizens for going outside? No wonder they want 100% mail-in ballots!
Email ThisBlogThis!Share to TwitterShare to FacebookShare to Pinterest
Posted by Drang at 12:17

Thanks for the link. Re the rest, that model was/is HOSED!!!