Isn't that interesting... -- An Update

So, what with all the news about Hunter Biden and the while sleazy, corrupt Biden clan, and the CSPAN "journalist" confessing to lying about sending that tweet and all, it has been an interesting day or two in social media, especially if one is part of the leftist/progressive/media/DNC persuasion, and I mean "interesting" in the Chinese curse sense.

Or, of you prefer, in the US Senate accusing you of interfering with an election, and the FEC  being out for blood sense.

So I go into Twitter and I see John "Oh No!" Ringo has tweeted as follows:

So I attempted to tweet as follows: "Their brain is full?" and got: 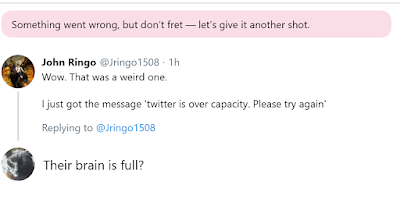 Note the pink bar at the top...

Have I finally reached the level of deplorableness where I am worthy of having Twitter shut me down?

Or is Twitter just so all upgefukt over the mess it has made the least few days that it is melting down?

UPDATE: apparently it was everybody, everywhere. They're "investigating."

Just coincidence it hit right as they were discovering the Streisand Effect?

Sure, let's go with that.

Email ThisBlogThis!Share to TwitterShare to FacebookShare to Pinterest
Posted by Drang at 15:39

Yet another reason I don't have a twit account, nor do I 'play' over there...