A month or so ago I scored a SureFire DSF-500/590 Forend Weapon Light for my Mossberg 500 in an Amazon Lightning Deal.

Then I had to look up YouTube videos on how to replace the forend.

Most of them have the demonstrator's hand is in the way.

So I ordered a book on how to do it. Then I ordered another one, to fill in some blanks.

Finally got it assembled yesterday, and it seemed to dry-fire OK, but I didn't want to try it too much, lacking snap caps. (Which are on order, and due to arrive on a week or three...)  Dinking around with it we established that the light on it's lowest setting is pretty darned bright. On the highest setting, I felt like I could send Morse Code messages to the International Space Station, if I remembered how to send Morse code messages.

By the time I had time to put it all together, well, lets just say that, when I went to the friendly neighborhood gun range and store to test fire it today I was fully expecting to step off the range and into the store and leave it with the gunsmith to put together for me properly.

I managed not to do a happy dance or to carry on like an idiot when I was able to put several magazine of slugs down range without a problem.

Well, except for recoil; not unanticipated, slugs not being known for being gentle on the shoulder, and the range being restricted to slugs for scatterguns. Still, ow. (Also, in all modesty, kudos to me for not adding any of the extensions to the Magpul SGA stock; I am convinced that having it set up for a shorter pull helped.) 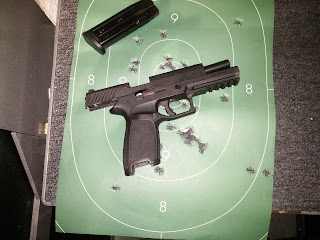 After testing the shotgun I got the Sig 320 out of the rental cabinet to try a box through it. Can't say I'm in love with it, but its not bad and I am in love with the idea that Mrs. Drang and I can have the same pistol, sized well for each of us. The modular grip frame seems like it may work better than any combination of any manufacturer's interchangeable back straps and front straps and grip panels.

Tried it from 3 to 10 yards, two handed, strong hand only, and weak other strong hand only. Got some weird twisting shooting it left-handed, not sure what that was all about. All shots were inside the 9 and 10 rings, until I was trying it one handed at the 10 yard line. Also, I didn't have any issues with my thumbs hitting the slide lock, like I've seen on some other Sigs. So it looks like a winner.
Email ThisBlogThis!Share to TwitterShare to FacebookShare to Pinterest
Posted by Drang at 15:18