First: If  you don't understand what is meant by The Boogaloo, well... I guess you can look it up on The Urban Dictionary.

In View From The Porch: People are getting edgy... Tamara excerpted a key 'graph from the rather lengthy post The COVID-19 Boogaloo Opus - Handwaving Freakoutery at Medium.

"The drones, donated by DJI, a Chinese company, have gone to 43 agencies in 22 states, all to help enforce social distancing rules."

Which of course, prompted a revival of the age-old questions
and
As infuriating as the implementation of technology in service of Big Government nannyism is,
Law enforcement is using drones to shout at people for violating social distancing.
the really bizarre thing about this story, as @LizRNC points out in her tweet above, is that these are DJI drones, a product of Communist China.

And an Internet search for the keywords "chinese drones law enforcement" will return dozens ( a conservative estimate) of articles referring to the US Government banning the use of drones from Communist China because of the predilection of the commies to have their tech phone home to the mother ship with details we'd rather the commies not have.

Seriously, what kind of an idiot elected official can be so tone-deaf in the face of Communist China's obvious responsibility for the current global pandemic and think "Hey, I know! We'll use ChiCom spy technology to nag people!" is a good idea.

Allegedly, these drones do not have the ability to transmit or record video.

Winnie The Flu says so. 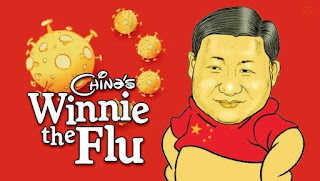 EDIT to add: And then there's this crap:

Note: See comments for some links to news reporting on the subject. Also, statements re: No Video are probably meant to be "no recording of video or taking of photos."
Email ThisBlogThis!Share to TwitterShare to FacebookShare to Pinterest
Posted by Drang at 19:48

Labels: #2019-nCoV, #COVID-19, Annals of Authoritarianism, Be Seeing You, Big Brother, Commies, Don't Tread On Me, Get Off My Lawn, Government, Low Flight, Pandemic Panic, When Can We Start Panicking, WTF?

What surprises me is that LEO will enforce these stupid executive orders by all levels of government.

I'm not surprised at all. They seem to feel quite comfortable stomping on quite a few of our rights. And next I'll be asked to support the sheriff's (fill in the blank) program.

If they can't transmit video, then how are they being flown? If you can see your drone, does having it transmit audio really help?

I think the "no video" statement is a misunderstanding regarding "video" versus "recording." Possibly on my part.
Here's a link to the MSNBC report: New Jersey City uses drones to enforce social distancing guidelines
And on Fox: Coronavirus spurs police to deploy 'talking' drones in Florida, New Jersey to enforce social distancing | Fox News
Also in Savannah,Georgia: Police Departments Use Drones To Enforce Social Distancing – CBS Detroit
Popular Mechanics seems to find it distasteful,bit necessary:Drones and Covid-19 | Social Distancing Enforcement.

The Best of NY? Really, Karen?

If the story is that they are taking video but not recording it, then I have a bridge for sale.