Whose Bright Idea Was This?!

So the weather has finally broken enough I can get out and put in a good 10000 steps.
On the homeward leg, I stopped at the local grocery store -- where I learned that for some reason grocery store workers don't seem to have priority for vaccines -- to pick up a couple things, cheap enough I paid cash.
When I got home I looked at my change and discovered that the 2020 Commemorative Quarter recognizes American Samoa National Park.
Yeah, I'd never heard of it, either but that's not the point.
National Park of American Samoa Quarter

Background
National Park of American Samoa is located some 2,600 miles southwest of Hawaii and is one of the most remote in the U.S. National Park System. The site includes sections of three islands—Tutuila, Ta’ū, and Ofu. Almost all of the land area of these volcanic islands—from the mountaintops to the coast—is tropical rainforest. The park’s area totals 13,500 acres, 4,000 of which are underwater.

That's still not the point.

This is the point: 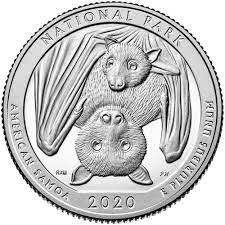 That's right, for 2020, #YearOfTheBlackSwan, #YearOfTheFruitBat, the Year of the Wuhan Flu, the CCPVirus, the year the world learned that some people eat bat soup, rare...

...The US Mint decided to commemorate the home of the Samoan Fruit Bat with a 25¢ piece.

Mind you, the decision was make well before 2020, but, still.

Meanwhile, I had to see this ad three or four times before I realized it was an ad for a mating dating service, not a trailer for a Marvel Supervillain movie.

I have to say, it surprises me not at all that 2020 would best be summed up by an ad for a dating app.

Email ThisBlogThis!Share to TwitterShare to FacebookShare to Pinterest
Posted by Drang at 15:57

Wow... and yes, that dating app is on the money!