So, for years, I slaved in the Salt Mines on the second shift, getting home around Midnight, and not being able to go to sleep right away, so even when Mrs. Drang and I both had the day off, I often didn't get up until nearly the Crack of Noon. For the last year, I had days off in the middle of the week, so us both having the day off together involved one or the other of us, or both, taking a vacation day.

Starting this spring, I work the First Shift, getting up about the time of day I was going to bed, and I have Sundays and Mondays off. Then Mrs. Drang's boss decided that, summer being the slow season, she and her counterpart could work 4 tens, so now she has Sundays and Monday off, as well. And we're both getting up at about the same time of day. So we started the tradition of having a real, sit-down breakfast together. Pancakes, waffles, omelets, french toast...

French Toast, AKA Egg Toast, AKA Pan Perdue, turns out to be surprisingly easy. (The French pan perdue, literally "lost bread", is because it was originally made from stale bread; the recipe would soften it up.)

Mrs. Drang visited the revitalized local Farmer's Market and discovered that there is a small bakery that is there every weekend, Forest Fairy Bakery. (Run by teenagers under someone's Grandfather's supervision, we think it's some sort of Junior Achievement operation.) She bought a loaf of Challah Bread from them. Challah Bread makes great awesome french toast; as rich as it is, though, it does NOT lend itself to the current custom of thick slicing; I believe the thick slices that are so common today are to make up for the fact that most bread today has so many chemicals in it, that it does not go stale until it starts to turn into a science project... 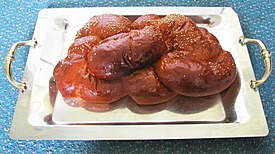 As you can see, Challah is one of those "braided breads", so to slice it, turn it on it's side. To get the maximum use of the bread, slice just enough off both ends of the "main body of the loaf" that all of your slices are "crustless." (You can either set scraps aside for later, go ahead and dunk them to avoid wasteage, or nuibble them while you work...) 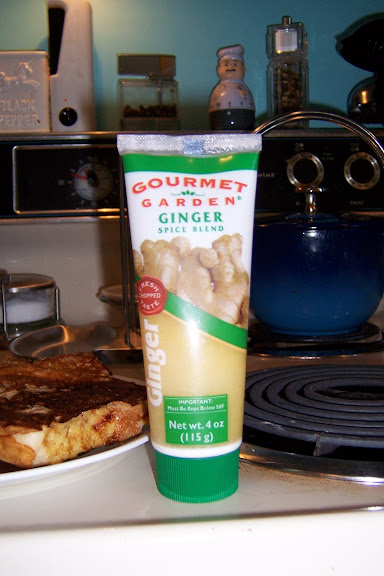 That's right, ginger in a tube. We so rarely used fresh ginger it went bad, but we discovered that, if you keep this refrigerated (or frozen!) it keeps forever.

EDIT: And vanilla. About a tablespoon, Mexican.

Add eggs, milk, vanilla, cinnamon, vanilla, sweetener and mix thoroughly. (I think you could add other spices, maybe nutmeg, possibly cloves. Some citrus zest might go well, too. According to that Wikipedia article I linked to above, furrners like savory, rather than sweet, french toast.)

Soak your bread in the mixture, and then throw on the griddle. (This is why, if you use standard sandwich bread, you want it stale, or sliced thick.) Turn when done, enjoy!

Here's a couple of slices of leftovers: 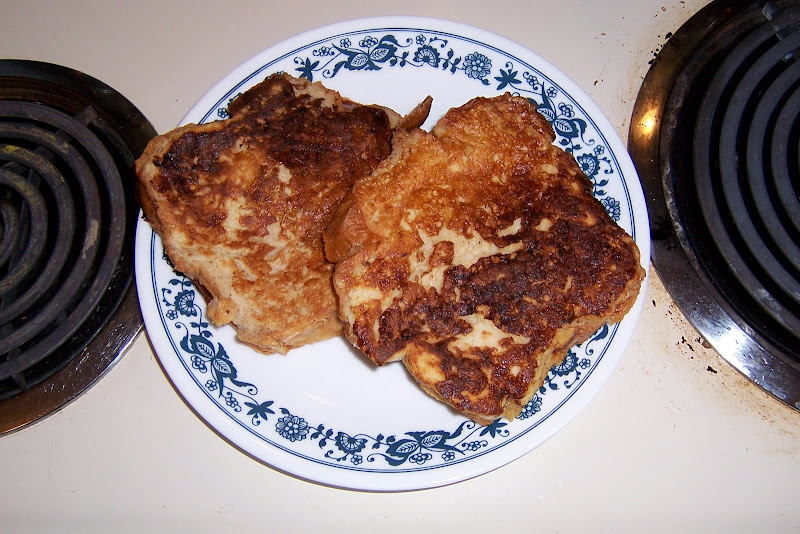 Actually, that's all the leftovers. How many slices you get will depend on how big your loaf is, of course. (Hmm, note to self, get stove re-finished...)

Aside from the traditional syrups and jams, we have also found that Lemon and Lime Curd make incredibly tasty toppings. (If you find another source of Lime Curd that does not involve making it yourself, please let us know!)
Email ThisBlogThis!Share to TwitterShare to FacebookShare to Pinterest
Posted by Drang at 10:46